Botanically, the coconut fruit is a drupe, not a true nut. Like other fruits, it has three layers: the exocarp, mesocarp, and endocarp. The exocarp and mesocarp make up the "husk" of the coconut. Coconuts sold in the shops of nontropical countries often have had the exocarp (outermost layer) removed. The mesocarp is composed of a fiber, called coir, which has many traditional and commercial uses. The shell has three germination pores (stoma) or "eyes" that are clearly visible on its outside surface once the husk is removed. 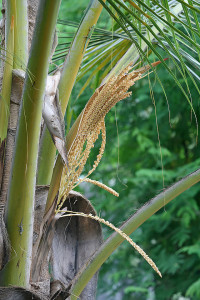