Oh no, Mercury is in retrograde and has heralded all sorts of spooky goings-on

'Mercury in retrograde': This means the planet Mercury slows down and appears to stop and move backwards

Sometimes, when life gives you lemons, you can conjure neither the spirit nor the enthusiasm to make lemonade. Instead, you wallow in victimhood and rail like King Lear at the perceived culprits. Popular targets include “the fates”, “misaligned stars” and “TfL”. For as the bus that sprayed a sheet of water at you disappears from view, the bellowing roar and angry fist pump directed at your heavenly persecutors is momentarily satisfying; even if, ultimately, you know you walked near a puddle when a bus drove past and, if that’s part of a cruel divine plan, things must be really dull up there.

Occasionally, however, your poor luck seems so aggressively persistent (“no one deserves such cumulative misery!”, you wail) that your faith in the rational is shaken fundamentally.

Good news (sort of): if you’ve been having a shocker, it might really be the fault of a higher order. For Mercury is in retrograde and it has heralded all sorts of spooky goings-on.

For those unfamiliar with the astro-terminology, a quick explanation. “Mercury in retrograde” means the planet Mercury slows down and appears to stop and move backwards. It is an optical illusion — like thinking that a stationary train is moving. It happens three or four times a year; this time it went into retrograde on October 4 and will depart this state on Saturday.

But what does this mean for earthly beings? In mythology, Mercury is the messenger and thus the main symptom of this period is messages getting lost in translation: whether that’s people taking “constructive comments” (ahem) as slights, computers short-circuiting, or forgetting arrangements. One editor reports that her pedicurist wrote down her appointment for the wrong day. Obviously, she blames Mercury in retrograde.

People are worried. Wild child turned earth mother Amanda de Cadenet has been warning her 80,000 Instagram followers about the perils; she reports that she has set a calendar reminder for precisely 12.17pm on Saturday, when the cloud will lift. On Twitter, people are blaming it for “messing up life” and asking others to “be kind” while they struggle through this difficult period.

There is a website dedicated to the question (ismercuryinretrograde.com) — right now it’s a yes.

Other symptoms include the return of things from your past, relationship issues and disorienting insights about life. Experts advise avoiding plans and commitments. However, they also promise that it could be a time for “the soul to ponder its destiny” and that the period could be a time for “solidifying a sense of your personal story and where you’re headed”.

So the mercurial cloud might have a silver lining. Or that could be the dust that’s been stuck in your eye all day. Ta, Mercury. 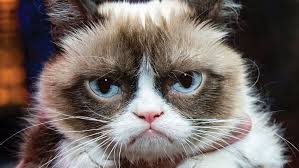